Introduction to Digital Signatures and PKCS #7

A digital signature is proof of the authenticity  of digital messages, files, executables, and documents etc. in modern communication - by employing strong cryptographic techniques such as encryption and hashing. A unique digital ID (and a signing key) is required to create a digital signature. Digital IDs or certificates are based on asymmetric (or public key) cryptography which use key pairs (combination of public and private keys). Public keys are openly distributed among the communicating entities and the private (signing) keys are kept secret. The most common public key algorithm used is RSA.

A digital signature is basically a small block of data which is attached to the message to deliver the following security services:

Process of Digital Signing and Verification

The process of digital signing and verification incorporates three steps:

PKCS #7 named as “Cryptographic Message Syntax Standard” is one the most famous and extensively used standard from the series of PKCS (Public Key Cryptography Standards) by RSA Security LLC. PKCS #7 is the specific standard used for generation and verification of digital signatures and certificates managed by a PKI (Public Key Infrastructure). This standard served as the basis for the S/MIME (Secure/Multipurpose Internet Mail Extensions) standard. PKCS #7 proposes a broad-spectrum syntax and format for creation of digital signatures which is elaborated in detail in RFC 2315. It also allows compatibility with Privacy-Enhanced Mail (PEM) format which is the default and most commonly used file format for storage and sharing of crypto keys and digital certificates. PKCS #7 allows PEM compatible signed-data to be converted into PEM messages.

When using PKCS #7, the result is the exportation of one type “ContentInfo”, in addition to the various object identifiers that are produced. Within this method, there are six general content types:

These types are classified into two classes:

The content types that fall under the enhanced class use encapsulation to encrypt data. These types are prepared with a single pass through indefinite-length BER encoding and are subsequently processed in a single pass using any BER encoding. This is useful when processing data from other processes. A sample S/MIME digital signature created by the private key is shown in the following figure: 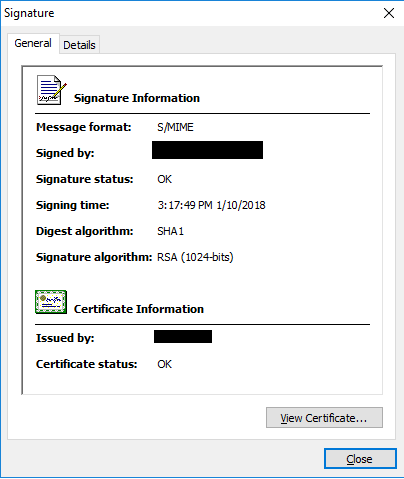 More details of the signature such as version digest algorithm, signature algorithm, content type, signing time and encryption certificate are shown in the following figure: 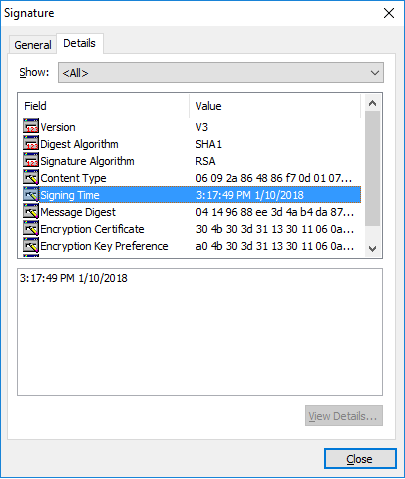 We have seen how there is a comprehensive set of standards and techniques that mean  digital signatures have a very well established framework. Building upon this, regulations such as eIDAS (in the EU) and UETA and E-SIGN ( in the USA) raise the game further by allowing digital signatures entirely equal legal status to traditional “wet” signatures. Specialist security companies, like Cryptomathic, have a strong track record of deploying very dependable, large-scale remote digital signature solutions that fulfill all the strict criteria of the regulations (with eIDAS being the most comprehensive and stringent).