In the mobile environment, source code is often distributed without enough security. Programs compiled as bytecode, such as the ones developed for Java or .NET, contain almost all the original information from the source code. Programs developed with native code, usually developed in C, Objective-C, or C++, are much more difficult to reverse. In what follows, we will look at the difference between interpreted code and native code in mobile operating systems and why we still need native code obfuscation.

In Android, applications are generally compiled in a java application, turned into class bytecode files by the Java compiler, and then into dex class files by the Dalvik Android VM (Android runtime). Xamarin allows developers to use .NET. However, the mono compiler behind Xamarin transforms the C# code into Java bytecode as well. This is interpreted code.

On the native side, developers can use the NDK (Android Native Development Kit) to interact directly with the kernel and the hardware to produce native code applications, using C and C++.

For an average mobile developer, using the NDK is much more difficult than developing with Java or Xamarin. Generally speaking, it is not recommended to use it unless it’s necessary, like interfacing a library using native code, for instance.

When attackers are targeting native code, the Dalvik VM is bypassed and a native android application is produced instead. Other than the Dalvik VM, there are not many code obfuscators available for native code. It's possible to use the obfuscator provided by LLVM [1] in the Android NDK toolchain. LLVM is the default compiler since NDK r13b [2], while GCC [3] has been removed since NDK v18b.

The native code development in iOS uses either Swift or Objective-C. Objective-C is C provided with some object-oriented features, while Swift is usually referred to as “Objective-C without C.” There are not a lot of applications using Java targeting iOS. However, Xamarin and C# is a popular way to build iOS applications as well. 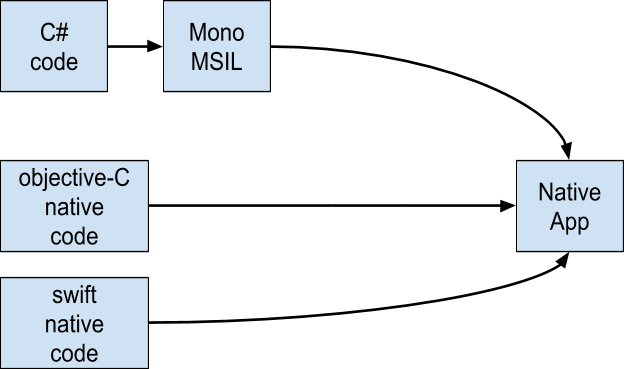 In iOS, most attacks against native code will come from the weaknesses of the Objective-C runtime:

As a first defense, iOS banking app developers can write parts of their code that deals with sensitive data, in plain C to prevent the attacker from using Objective-C reverse engineering tools like class-dump, class-dump-z, Cycript, or the Frida Instrumentation Framework.

There are many methods to obfuscate native code in both Android and iOS :

Obscure all data structures, permute all variables together and rename them with incomprehensible tokenized names, permute the data stored in arrays or dictionaries, etc.

Reorganize the control flow of the application, inject dead/dummy code, and remove functions’ prototypes by inlining them in other functions, where they are initially called. Use proxy methods to redirect the flow of execution and the process tree.

Counter the techniques of known de-obfuscators by preventing them from operating by using some of their weaknesses.

Strip the symbol table of the binaries, by removing all information that is not needed for execution.

There are, however, several tools and methods that provide good protection against native decompilers and other instrumentation frameworks.

Banking applications using native code can use these obfuscation techniques to protect themselves from malevolent reverse-engineering.