Here we describe some of the HTTPS vulnerabilities in the context of mobile banking and their countermeasures.

In short, HTTPS should be using TLS 1.2+. This is because other protocols that may be used for HTTPS, like the Secure Socket Layer (SSL) protocols (SSL 1.0, 2.0 and 3.0), as well as the Transport Layer Security (TLS) protocols version 1.0 and 1.1, are considered to be insecure and broken.

SSL is vulnerable to the POODLE attack.

A version of POODLE also targets TLS. Heartbleed targets the OpenSSL implementation of SSL/TLS which is by far the most popular library used for SSL and TLS. Sweet32 targets several 64-bit ciphers used in TLS as well. Finally, BEAST targets TLS 1.0 itself.

Because of its structure, HTTPS is totally vulnerable to man-in-the-middle attacks. If an attacker manages to have a target user accept a ‘rogue’ certificate, then a proxy SSL server can stand in the middle and record all the HTTPS traffic in clear.

For example, if the user accepts the root certificate of a ‘spy’ server, then the traffic to the legitimate server can be redirected to the spy server by modifying the host file of the user, by rerouting, or by using a rogue DNS. The user will be presented with a valid certificate since the user previously accepted the rogue root certificate. Therefore, the connection to the web server will look perfectly normal. The HTTPS traffic can then be deciphered within the proxy SSL server, reciphered, and forwarded to the legitimate web server. 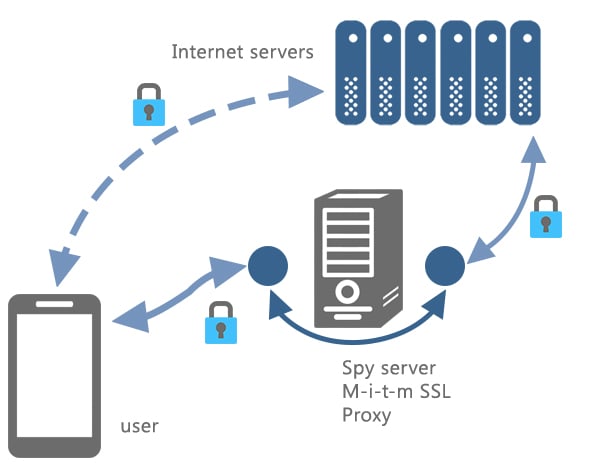 Several countermeasures can be deployed in order to prevent the attacks on HTTPS:

Communications between mobile banking apps and the remote bank servers must be done inside an end-to-end secure channel. In the context of securing mobile applications, TLS is mandatory. This is to prevent “sniffing” of the sensitive data, in the event that hackers are intercepting the communication. The most convenient secure channel is the HTTPS protocol. Generally, HTTPS is considered totally secure. Unfortunately, this is not completely true - which is why additional protection measures, as described above, are needed when deploying highly sensitive and targeted financial apps.